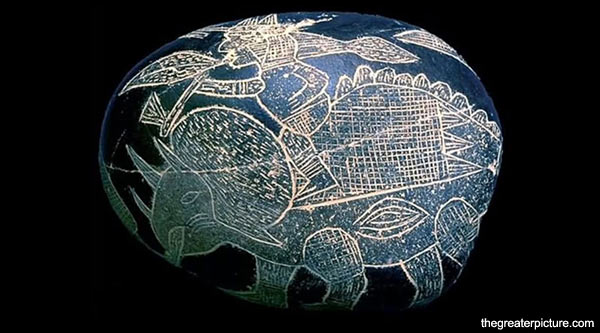 Do the Ica Stones prove that mankind coexisted with dinosaurs and had advanced technology?

It is a rare object that stimulates the curiosity of archaeologists, ancient astronaut theorists, and creationists all at the same time, but the Ica stones have done just that The Ica stones refer to the momentous collection of more than 15,000 engraved stones which curiously depict clear and detailed dinosaurs, complex medical surgery, and forms of advanced technology such as telescopes. Most believe the stones are nothing more than an elaborate hoax, while others maintain that they are evidence that an ancient race of humans who possessed advanced technology coexisted with dinosaurs.The stones, which vary in size from pebbles to boulders, are composed of grey andesite with a granite semi-crystalline matrix. It is a hard stone that is difficult to carve, but the images are scratched through the oxidised surfaces. The images carved onto the surface also vary in complexity from simple pictures engraved on one side of the stone to designs of complex scenes.  Some of the designs appear to be in styles which can be recognised as belonging to the Paracas, Nazca, Tiwanaku or Inca cultures, while others are in a style never seen before.
The subject matter includes images of flowers, fish, or living animals, including the more controversial dinosaur depictions, as well as mythological-type beasts or monsters. Other stones depict geometric images and symbols that correspond with known petroglyphs and geoglyphs. For example, one of the Ica stones depicts a monkey, which is almost identical to one of the Nazca geoglyphs.

The stones that have drawn the most attention are those that depict different species of dinosaurs, as well as those that show advanced technology, such as telescopes and flying machines, and medical practices that were unknown at the time they were found, such as a caesarean section with acupuncture used as a form of anaesthesia, and heart transplants.

The depictions of dinosaurs on these Ica stones appear unmistakable


The background story
According to reported accounts of the discovery of the Ica stones, in 1966, Peruvian physician Javier Cabrera Darquea was presented with a stone by a friend for his 42nd birthday which had a carved picture of what he believed to be an extinct fish. Based on his interest in Peruvian prehistory, Cabrera began collecting more of the stones. He purchased more than 300 from two brothers who also collected pre-Incan artefacts. Cabrera later found another source of the stones, a farmer named Basilio Uschuya, who claimed he found a huge cache of the stones when the Ica River overflowed its banks destroying a nearby mountain and exposing an unknown cave.  Uschuya would not reveal the cave’s location but agreed to sell thousands of the stones to Cabrera, boosting his collection to more than 11,000 stones by the 1970s. 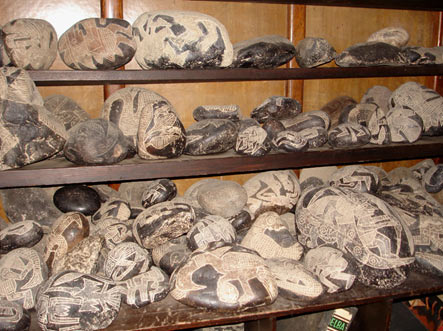 Just some of the thousands of Ica stones that form Cabrera’s collection.

News of the find caught the interest of researchers and the eyes of the world turned toward Ica. Subsequently, the BBC produced a documentary on the discovery bringing an extraordinary amount of focus on the Peruvian Government. Under pressure to police the country's antiquities, the Government arrested the farmer for selling the stones. Facing years of incarceration, the farmer recanted his story claiming he'd carved all 15,000 of the stones himself.  He even demonstrated how he engraved the stones using a dental drill. The stones were labelled a hoax and the government considered the embarrassing matter closed. But the story would not go away.Cabrera published a book, entitled ‘The Message of the Engraved Stones of Ica’, discussing his theories of the origins and meaning of the stones. In it he argued that the stones show that humans originated from another planet and were at least 405 million years old.  Further, he claimed that "Through the transplantation of cognitive codes to highly intelligent primates, the men from outer space created new men on earth."
Cabrera’s book, as well as his opening of a museum featuring several thousand of the stones in 1996, brought widespread attention to the stones. Creationists used the Ica stones to claim that humans lived in proximity with dinosaurs, which contradicts evidence that the extinction of dinosaurs predates mankind by approximately 65 million years and disproves evolutionary theory. Believers in the ancient astronaut theory have also cited the stones as evidence of a lost, advanced civilisation brought to man from other planets.  Neither of these positions is supported in scientific or academic communities.

Fact or Fiction?
Those who maintain that the Ica stones are authentic maintain that Uschuya was forced to announce that he had faked the stones to avoid imprisonment – Peruvian law prohibits the sale of archaeological discoveries. Indeed, Uschuya himself recanted his forging story during an interview with a journalist, saying that he claimed they were a hoax to avoid jail. However, sceptics dismiss this explanation referring to Uschuya’s convincing demonstration of how he produced them.
Proponents also argue that other engraved stones have been found within the Ica region, not just the ones ‘found’ by Uschuya.  Archaeologist Alejandro Pezzia Assereto, a trustee of the Ica Regional Museum, found engraved stones within three different tombs dating from 400 BC to 700 AD. The engraved images on the stones resemble those found on the Ica stones sold by Uschuya. In 1968 Assereto published his findings, including drawings and descriptions.
Nevertheless, it is argued that if ancient humans once possessed advanced technology there would be a lot more evidence than carved stones, including the technology itself. Furthermore, sceptics point out that the dinosaur depictions resemble popular mid-twentieth century reconstructions, which show them as lumbering beasts, dragging their tails along the ground. We now know that this was not how they walked, a clear demonstration that the stones are a twentieth-century product and not the creations of people who saw living dinosaurs.
According to Cabrera, the proof that the stones are not a hoax is in their number. There are too many stones for a single farmer, or even a collective of hoaxers, to have scratched out.  It has been calculated that the farmer would have had to carve one stone every day for over 40 years to produce the total library.
An alternative theory put forward is that some of the stones are authentic, while a smaller subset, perhaps the most controversial, was forged. This could account for virtually all the facts of the case. Uschuya may have found some stones, produced more which were controversial in order to garner interest, and then sell them at a good price.
Many have asked, why don't scientists simply date the stones and settle the matter?  The problem is that stones without organic material trapped in them can only be dated according to the strata layer in which they are found. Since Cabrera's stones come from some mystery cave which has never been identified, much less excavated, there is no way to date them.
Today, most agree that the stones are nothing more than an interesting hoax, however, others maintain that attempts to discredit the stones are merely a way to hide evidence that conflicts with mainstream perspectives. The Ica museum in which the stones are housed remains open to those who would like to interpret the mysteries for themselves.
Featured image: Ica Stone depicting man on top of a dinosaur.

The Ica Stones: Ancient Engraved Records – by Kathy Doore
Are the Ica Stones fake or real? – by Christopher J. E. Johnson
Are the Ica Stones Fake? Skeptics Under Fire – Living Dinos
The Ica Stones and Dr. Javier Cabrera – by Sara Ross
Fagan, Garrett G. 2006. Archaeological Fantasies: How Pseudoarchaeology Misrepresents the Past and Misleads the Public. Routledge.
By E-D ETERNAL DATABASE at October 15, 2017 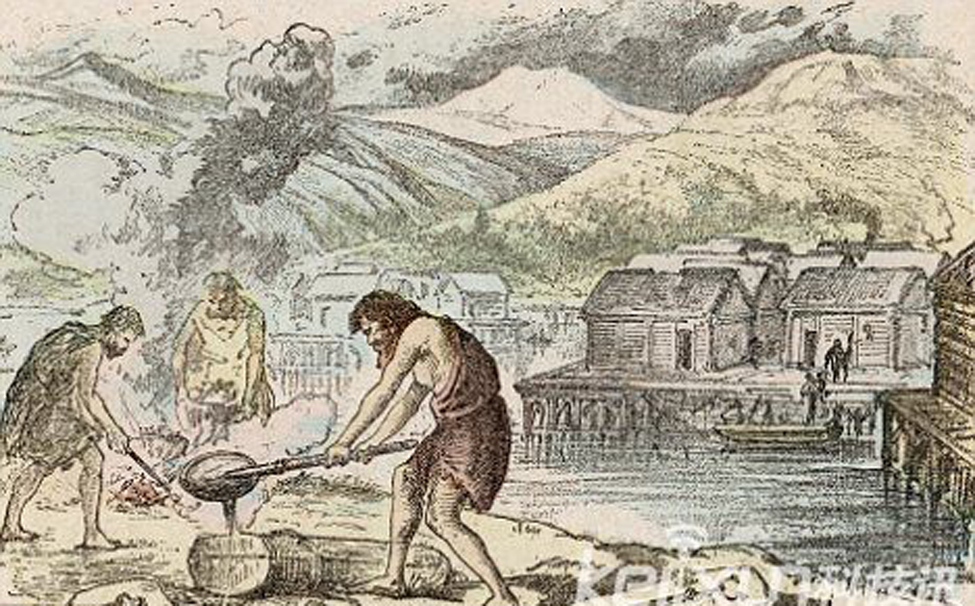